Happy Computing Tip #107
Surge Protectors – Why Use Them?
By Switch, the I.T. Support Robot

What is a surge protector?

It’s a device that protects a computer or electronic device from surges in the electrical power that flow from the power supply. In simpler terms, it’s a device that protects your computer from power surges, or a spike in your electrical current. Power surges can last only a thousandth of a second. However, they can cause problems if you’re not protected from them. So how can you protect your electronic equipment from power surges? By following the steps below: 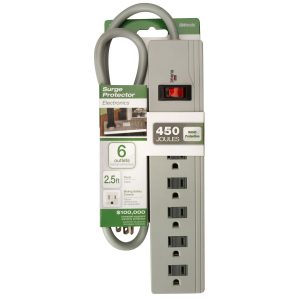 3. In the event that your computer is affected by a power surge, it’s critical that you have backups in place. We know we talk about this often, but it’s serious and important that you have all your files backed up. We don’t want you to lose those wonderful pictures from your vacation last year, the super important project for your company, or your great-grandmother’s recipe. If you want to see the different types of backups available, click here.

If you don’t have a surge protector, it’s crucial that you get one. If you need advice or help on which surge protector to get, give us a call! We’ll be happy to help. Another very important device to have is a UPS, or Uninterruptible Power Supply, but we’ll talk about that another time.

If you would like to see more tips, tricks, and fun, follow and like us on our social media. Stay tuned for next week’s email, but until then

Our experience gives you the assurance that you will always have an expert to guide you on the network or computer projects you wish to implement.

Our experience gives you the assurance that you will always have an expert to guide you on the network or computer projects you wish to implement.